The heat wave has come and gone(!) and we’ve had an eventful week at Headstone Tennis Club. Wimbledon crowned Simona Helep and Novak Djokovic are champions, but Headstone has its very own winners to recognise….

Starting on Sunday, congratulations to Tina Murray and Sachin Garg for winning the Chris Brown Trophy! A great, fun filled day enjoyed by all who attended.

We celebrate Chris’s life with this tournament every year who passed away at the age of 21 with Headstone Tennis Club being very much part of his life. For the last 38 years, we have had the Chris Brown Trophy tournament.  His mother was there to present the trophy to the winners…. 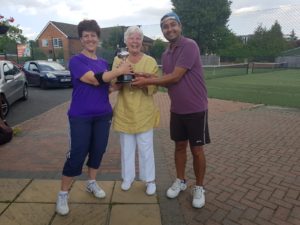 It didn’t stop there for Tina…

A massive congratulations to the Headstone Tennis Club Ladies team who played their last match of the season on Thursday with a 14-4 win against West End Pinner, thereby confirming their position as CHAMPIONS OF DIVISION 2!

A fabulous achievement for a great season and they can look forward to the dizzying heights of Division 1 next year! The hard work and effort put in by the whole team has paid off and it’s a team game so well done to all the Ladies that have been involved throughout the season: Olga Freely, Tina Murray, Jas Bhandari, Miranda Keely, Hannah Murray, Sandra Lee Palmer, Natalia Krauz, Elizabeth Burch, and Ayesha Khandwalla. All the Ladies mentioned contributed to the success of the season – 111 points is no mean feat!!!

Here’s a few words from the captain Tina:

“We are absolutely bowled over by our success this season. We played consecutively well throughout and thoroughly  deserve our promotion. Division 1 will be another challenge but our game is improving each season to match the standard required so hopefully we can do the same again. Really proud of the girls!!” 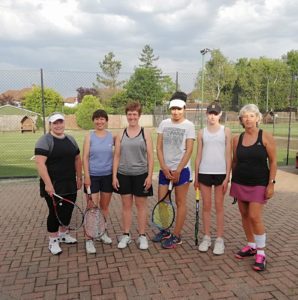 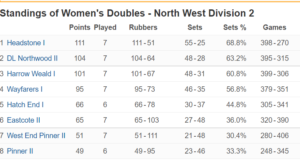 The leagues are all drawing to a close, but the tennis continues over the summer…let’s see you all down hitting some balls! You could be the next champion we are reporting on! Don’t forget the Friday Night Socials continue…see you at the club soon!

One Thought on “We have CHAMPIONS to crown…”